In gut system there is a mix of both good and bad microorganisms. In case of a healthy person, there are approximately 5 billion microbe cells, majority of which are good microbes found in the digestive tract to help with effective digestion system. Good microbes take away nutrients from the bad ones, hence, help reduce pathogenic microbes. In this way, it produces an ecological balance for gut microbes and helps improve the immune system in the digestive tract and, hence, good health in the long term.

Yoghurt offers more benefits than we thought as it contains good microorganisms that help enhance our health and prevent diseases when it is consumed regularly. Meiji Bulgaria yoghurt contains LB81, the good microorganisms – an authentic bacteria from Bulgaria which can be found only in Meiji Bulgaria yoghurt. Academic research by scientists found that LB81 helps improve people’s health when consume regularly. Metchnikoff E, a Russian scientist at Pasteur Institute observed that Bulgarian people consumed fermented milk on a daily basis and Bulgarians have long life expectancy. 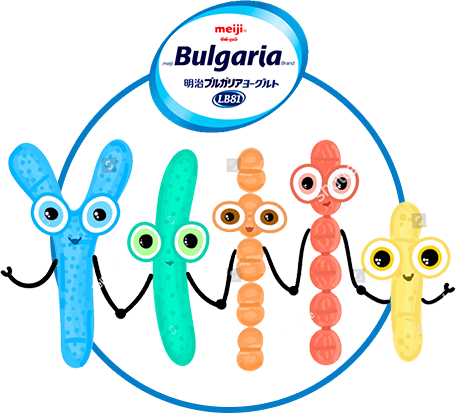 His research found that good microorganisms in fermented milk transformed sugar content in milk to lactic acid. This strain of microorganisms could also inhibit growth of bad microorganisms which required protein and fat and caused them to mutate. Yoghurt that made by fermentation with lactic acid bacteria is beneficial for the body as it leads to further production and respawning of good microorganisms. It offers health-related benefits as well as affects the aroma and taste of the product.

LB81 (Lactobacillus bulgaricus 81) is the good microorganisms with supporting scientific research conducted among healthy participants and participants with constipation problem. It found that people who consumed yoghurt with LB81 on regular basis had significantly improved bowel movement behavior by softening feces, making it easier to defecate, and returning to have regular bowel movement. Apart from that, a study by Otsu and associates (1996, 1998) also found that after consuming yoghurt which contained LB81 either in cup yoghurt format or drinking yoghurt format, people with chronic constipation reported reduced stomach discomfort and abdominal contraction as well as feeling more comfortable in the stomach.

The mentioned result is in line with a study by Yamamoto and associates (1998) which found drinking yoghurt which contained LB81, when consumed on regular basis, could help relieve constipation and ease defecation. Therefore, consuming yoghurt with probiotic is one of the remedies for people who experience constipation.

How to consume yoghurt to take care of your health